Mark Zuckerberg and wife, Priscilla Chan, promises 99% of their personal wealth to their charitable initiative (video) - Welcome To Plugstuck Afrik
Skip to content

Mark Zuckerberg and wife’s first-ever joint network TV interview, speaks about what they want to accomplish with their philanthropic endeavour.

Facebook CEO Mark Zuckerberg and his wife, Priscilla Chan, have promised to give 99% of their personal wealth to their charitable initiative.

The couple is looking into how all diseases can be eradicated and how there can be improved equity education as they invest their Facebook stock towards the Chan Zuckerberg Initiative (CZI), which is awarding millions of dollars.

Speaking on “CBS This Morning” the couple revealed their plans to give back through their charitable initiative, the CZI company, that turned four years old on Tuesday and has about 400 employees.

Zuckerberg said: “There are a lot of philanthropies that try to bring capital, right? And help fund important work. But there aren’t that many that have the capability to build tools to empower different folks who are on the front lines.”

Chan added: “Teachers, doctors, scientists — we don’t have the right tools to do that. And Mark has such incredible experience of building tools.”

The couple has promised to give the initiative 99% of their personal wealth, mostly in the form of Facebook stock.

“One of the promises that you gave… was you want to eliminate all diseases,” King said. “I heard that and I went, ‘What?'”

Zuckerberg replied: “Well, we’re not going to do that ourselves, but… we do think that it will be possible to cure, prevent, or be able to manage all diseases by the end of this century.”

King noted that it sounded almost “fantastical” and a little “pie-in-the-sky,” to which Chan said: “Setting audacious goals is important, and we need to think about beyond what’s possible.”

Chan said one of those goals is to map every single cell in the human body.

She added: “You would think that we already know all the cells and what they do, and the thing is, we don’t … and we need a reference.”

Zuckerberg said such a biological map could serve as a “very basic building block for a lot of biological research to happen on top of that.”

Recalling how they began working together on the initiative, Zuckerberg said: “One of the first things that she said to me was, ‘Okay, if we’re going to work together on education, you need to go be a teacher somewhere.’ And I was like, ‘I can’t be a teacher. I’m running this company. It’s a public company. I don’t have time to do that.’ And she was like, ‘No’. She was like… ‘There’s no way that we’re going to do this work together if you don’t get some experience doing this.’ So I started this after-school program on entrepreneurship.”

Chan told CBS co-host Gayle King she felt it was important for her husband to gain that practical experience because, “one, it’s so rewarding… and, two, it makes you feel what you read in the news… in a visceral way … and I want you to have that deep gut feeling of, like, ‘This is critical.’

CBS This Morning
✔@CBSThisMorning
.@facebook CEO Mark Zuckerberg and his wife, Priscilla Chan, have promised 99% of their personal wealth to their charitable initiative, @ChanZuckerberg.

“Setting audacious goals is important, and we need to think about beyond what’s possible.” https://cbsn.ws/2Pc1fMl 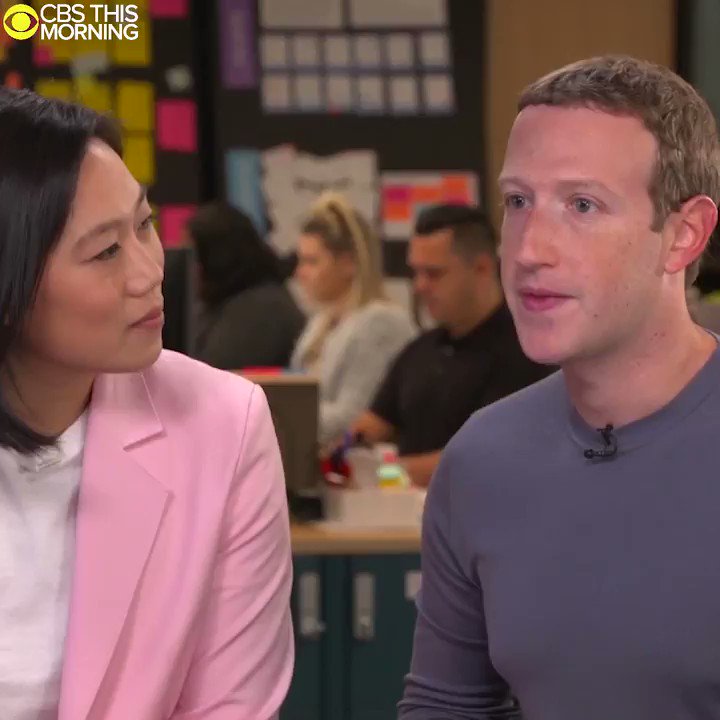